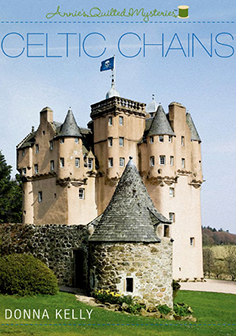 Subscribe to this club
Dottie Faye Sinclair is on edge from the minute she arrives in Ireland. She is there to help her niece, Emma Cotton, in the investigation of Liam Gallagher, a textile shop owner in the quaint town of Merrow. But talk of banshees and pookas, mythical creatures of the Emerald Isle, incites Dottie Faye's superstitious nature and compromises her ability to help.

Gallagher was a student in a textile design class taught by Rose Peterson, a close friend of Emma's who was killed in what authorities described as a tragic accident. But Emma and her best friend and business partner, Kelly Grace, know it was murder.

Joining Emma, Kelly and Dottie Faye is Kelly's mother, Maeve Quigley, who was born in Ireland and whose extended family lives in Merrow. But the family connection could be a liability when Maeve becomes a suspect in the death of a man linked to her father.

An old hermit named Mick, befriended by Maeve soon after her arrival, reveals dark secrets connecting her father and the Irish Republican Army. But he is murdered before he can finish his tale of death, betrayal and subterfuge. An Irish Garda detective finds physical evidence pointing to Maeve as the killer and is uninterested when Emma and Kelly find circumstantial evidence to the contrary.

So while Emma, Kelly and Dottie Faye hope that their hunt for Liam Gallagher will bring closure to Rose's case, Maeve hopes that their investigative prowess will keep her out of Celtic chains.

“
Hard to put the book down!
Vicki, Oregon
“
I just love all your series stories. They are a great read.
Patricia, Mississippi
“
What an exciting series! I love the quilt squares, too.
Kathy, Maryland
“
Excellent characters and storyline. Cannot wait for the next one!
Shelagh, UK

Thank you for your interest in Celtic Chains