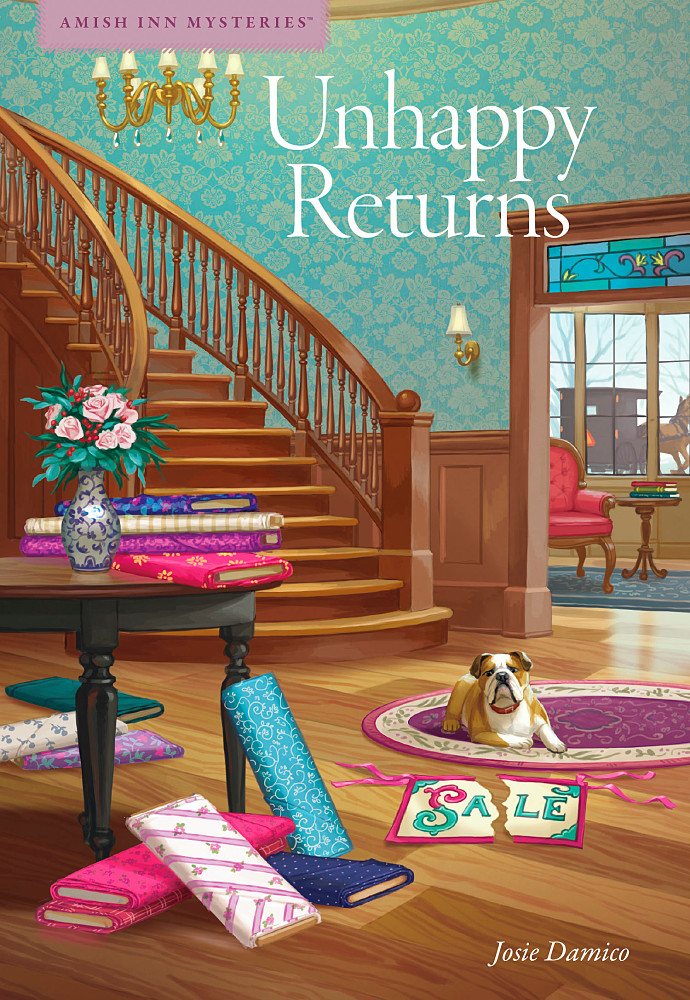 Subscribe to this club
Liz Eckardt, owner of the Olde Mansion Inn, has a case of the January blahs. She's not the only one. The Material Girls can't seem to build much enthusiasm for their latest quilting projects. Even Beans, Liz's lazy bulldog, is sawing more logs than usual. But then someone thinks of a bang-up idea: a clearance sale at the Sew Welcome Shop, along with a fun fabric swap to turn around everyone's moods. To spruce up the store, Sadie and Mary Ann hire Jacob Hochstetler, a former Amish man who now works at Cross Furniture Company, to construct a custom cabinet to showcase some of their wares. Jacob's been living in the city for a few years, but now he's come home and is trying to carve out a new life for himself.

When one of Liz's guests, a man who goes against everyone's grain, is murdered in Jacob's temporary workshop in Liz's garage, Jacob is immediately pegged for the crime. After all, it was his chisel buried in the victim's chest. Jacob has a stained past -- but Liz can't believe that her young friend is capable of finishing anyone off.

Liz has more than just a murder to solve, though. The dead man left behind a flighty fiancé whose heartwood is not exactly broken. Seems she's been pining after Jacob all along, and Liz must console the woman when her plans for their future are cut down. Another guest at the inn is tough to gauge. It isn't long before everyone's leveling accusations at him. And what about Samuel Hochstetler? Jacob never measured up to his father's specifications, but when there's a threat to his family, Pleasant Creek may find that Samuel is capable of rubbing someone out.

Can Liz, with help from the Material Girls and Mayor Jackson Cross, assemble the pieces of this case before a killer puts the screws to another victim?

Thank you for your interest in Unhappy Returns