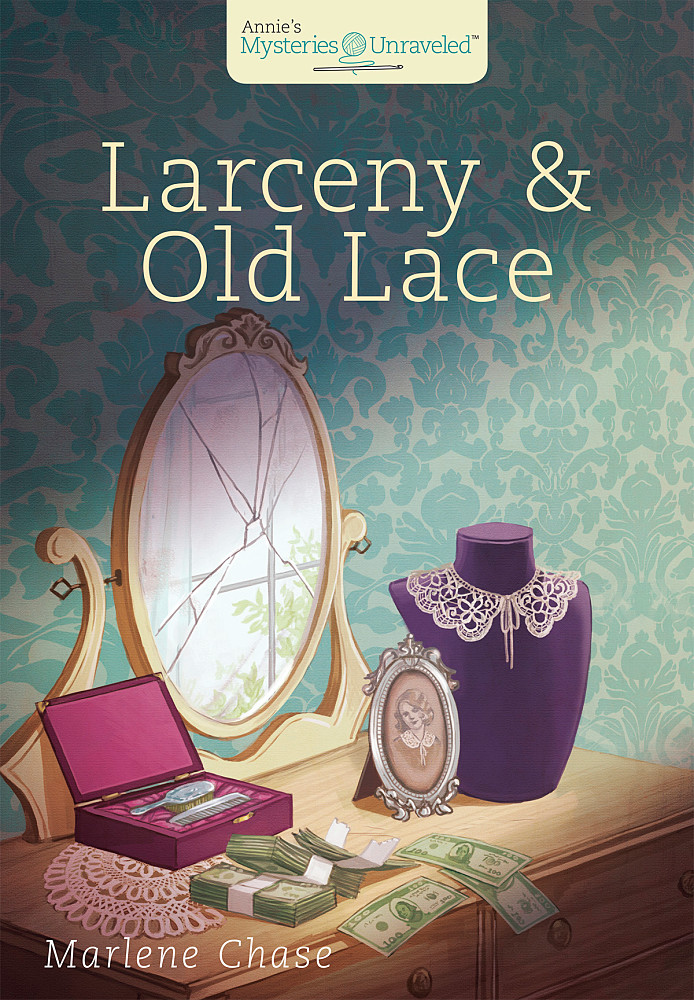 Subscribe to this club
Kate Stevens has begun work on a new lace crochet design book, and she has sought the help of Madeline Townsend, a wealthy widow who virtually is a recluse. Their love of crochet has forged an instant bond, but Kate quickly learns how tenuous Madeline's grasp on reality is.

The elderly woman lives in constant fear for her husband, now dead for over a year. Kate learns that Madeline's sister and nephew are now her caregivers, trying to shield her from painful truths. They seem to be afraid that Kate's growing friendship is actually exacerbating Madeline's emotional condition.

But Kate worries that Madeline is slipping more and more into a world of paranoia.

As Kate's affection deepens for Madeline, a budding friendship begins with the dashing nephew, Robert Townsend. Handsome and rich, Robert's suave nature turns Kate's head and grabs the interest of Peter Matthews, the Fort Worth police detective who continues to vie for Kate's attention.

Peter distrusts Robert, but is that his professional instinct speaking? Or is it just the green-eyed monster of jealousy rearing its ugly head?

With every turn, Kate's hope to collaborate with Madeline on the design book is blocked. But instead of discouraging her, Kate is determined to blast through the logjam of mystery and help her newfound friend.

At 42 years old, Kate would have never expected to be described as any of these. But sometimes life has a funny way of taking you down the path least expected. The one thing that has remained constant in Kate's life is her amazing ability to turn imagined crochet designs into beautiful creations that others can enjoy.

It's Kate's God-given talent that landed her an amazing book deal featuring her crochet designs ... but will it end up being one huge mistake?

Known as the neighborhood serial killer -- of plants, that is -- Vivi is full of energy and excitement, and is always happy to share one of her mom's delicious home-cooked meals with Kate. While she may be a few years younger than Kate and not quite as skilled at crocheting, Vivi proves to be a tried-and-true friend who is happy to lend a hand in getting to the bottom of Kate's latest dilemma.

One of Fort Worth's finest detectives, Peter's handsome dark blue eyes can sparkle with mischief at times. The epitome of a Western lawman with his tall frame and wide shoulders, Peter is a welcome face as Kate works to clear her name in her book publisher's sudden death. For his part, Peter is captivated by Kate's smile and wants to be more than just a friend.

The owner of Once Upon a Yarn, a needlecraft shop in Fort Worth, Paige is full of life and wisdom. She likes to stock her shop with a mix of traditional and trendy needle arts that are as beautiful as her colorful personality. Delighted to welcome Kate into her cozy crafters' boutique, Paige at times finds herself stepping away from the counter to help Kate with her latest mystery.

A longtime friend of Paige Bryant and her husband, Adam provides Kate with practical advice to guide her career and helps fill the void left by Kate's father who died during her childhood. Adam has known his share of grief as well. Widowed two years ago, Adam learned crochet from his late wife, Julia, during her final illness. The craft provides constant comfort for him.

The old adage says, "like mother, like daughter," and Vanessa has definitely inherited Kate's keen eye for crochet design. But right now Vanessa prefers to wear her mother's designs than create her own. She's more focused on enjoying and exploring life as a freshman at Regency College in Fort Worth with an occasional stopover to see how Mom is settling into her new home in Sage Hills.

With a pleasant smile and laugh lines around his eyes, Roger is Kate's good-natured contact at Creative Inspirations Publishing. Their popular new magazine, Hook and Needle Artistry, featured Kate on the cover with an exclusive story inside the first issue. Now, Kate has a regular column in this well-liked craft magazine.

Thank you for your interest in Larceny and Old Lace