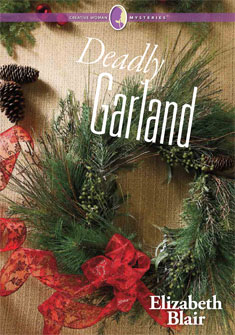 Subscribe to this club
The yuletide season has wrapped the small Oregon town of Apple Grove in tinsel and ornaments, and Shannon McClain is anxious for Christmas to arrive. The Paisley Craft Market & Artist Lofts is decked out in holiday finery, and Shannon needs only to find the right tree to finish off the decoration.

She and Michael Stone, the security expert who has slowly won her heart, are on a trek to Olson’s Tree Farm, when they run across a gruesome find: the body of one of the farm’s workers, pierced through the heart with an arrow. With turkey bow-and-arrow season open and a hunting tract nearby, was the man’s death an accident? Or was it cold-blooded murder?

Farm owners Marge and Dick Olson were good friends of Shannon’s late grandmother, Victoria Paisley, and Shannon feels duty bound to help them through the trauma of the incident. She also must console Carrie Weston, one of her shop’s employees, who coincidentally was the girlfriend of the dead man.

Is Carrie somehow connected to the death of her boyfriend? Was he killed in some kind of jealous rage, or was he just at the wrong place at the wrong time? For the sake of the Olsons, Shannon digs into the case, hoping to find an answer.

Meanwhile, Hillary Jenkins, a new helper at Kate Ellis’s Ultimutt Grooming, is enlisted to teach a class in wreath making at Shannon’s craft market. Hillary is a quiet, meek soul, but her creativity wows the Purls of Hope, the knitting group that holds weekly meetings at the shop. Soon Hillary is the center of attention—even though no one, including Kate, knows much about her.

It’s shaping up to be a chaotic holiday season in Apple Grove, but if Shannon and the Purls have anything to say about it the case will be solved before the Twelve Days of Christmas are over.

Thank you for your interest in Deadly Garland